I was given the very cool honor of getting to tap the firkin (a small barrel of Real Ale) this past Friday at the Tied House, for being such an avid Tied House fan on Twitter, Facebook and my blog. I was very nervous when I discovered this was a good ol' fashioned type of tapping - with a pointy tap and a mallet! I'd heard the last person to do this got sprayed in beer - and I did *not* want to waste fine beer!

Carolyn and the gang walked me through it, and with one (okay... two) swift swings, the firkin was tapped! 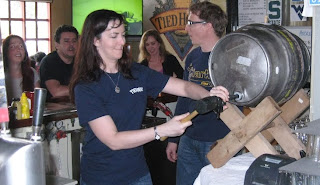 This month's beer was a fine Mai Bock from Peter Licht and Ron Manabe. While I've complained in the past that the firkins can suffer from too much yeast (most likely from not sitting long enough before being tapped), this Mai Bock had no issues there. The *imperial* sized pints were filled nearly to the brim by the happy bartenders, and the beer went down smooth. At one point I heard the ABV was 7%, so we all tried to be careful with the quantities, but the beer was so yummy that I think there were a lot of hang overs on Saturday (don't worry, most of us walked there!)

I don't have much experience with Mai Bocks, but this one reminded me of all the things I love about a hefeweisen, and none of the things I don't. It was light and crisp, with a slight citrus flavor. It was a bit cloudy, but like I noted before, was not yeasty.

I think our group made a pretty good dent on the firkin :-)

I don't know what the special beer for next Month will be, but I can tell you this: if you go to the Tied House in Mountain View on the first Friday of every month about 5PM, you won't be disappointed. 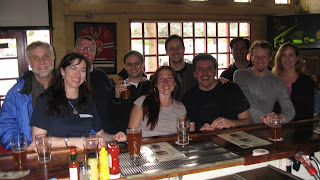 (in interest of full disclosure, I did get a free pint for my tapping efforts, but if this wasn't a good beer, I wouldn't have bothered discussing the taste :-)
Posted by Valerie Fenwick at 12:30 PM 1 comment:

Email ThisBlogThis!Share to TwitterShare to FacebookShare to Pinterest
Labels: beer

We were lucky enough to catch the great production of Sweet Charity at West Valley Light Opera down in Saratoga CA this Saturday. While I'm familiar with most of the songs (like, Hey Big Spender!), I'd never managed to see the show before.

One thing that really stood out to me in this show was the ensemble! Each and every one of them were able to dance, sing and act! When they were on stage, they were in the scene - never just standing there.

Katie O'Bryon was amazing as Charity, getting you immediately on her side, no matter how bad her choices were. She was hysterical - especially in the Vittorio Vidal's Apartment scene - the portions where she was in the closet (which, very cooly, we could see into through a scrim) had me laughing myself silly.

My friend, Michael Carey, was charming, sweet and endearing as Charity's first "sensible" love interest, Oscar. His chemistry with O'Bryon, particularly in the Coney Island and Barney's Chile Hacienda scenes, was delightful.

This only runs for one more weekend, so please be sure to check it out!
Posted by Valerie Fenwick at 12:00 PM No comments:

Email ThisBlogThis!Share to TwitterShare to FacebookShare to Pinterest
Labels: Theater

Okay, so I'm behind on writing up the beer dinner's I've attended... This one, which was fabulous, was on December 2, 2009 at the Monk's Kettle. While these dinners usually feature a specific brewer, which makes for an interesting challenge for the chef to pair to a limited set of beers, this one was coordinated with an importer, Shelton Brothers, so we got to "tour" the world at Monk's Kettle that evening.

We started out with a delightful visit to Germany with Weissenohe Monk's Fest, which featured a slightly hoppy caramel flavored Marzen style beer. This paired amazingly well with our starting course: chicken liver braunschweiger with pickled shallots on a crostini. I don't know about you, but I love braunschweiger and feel that it is a type of mystery meat that has been largely neglected by the American masses over the last few years. I was glad to see it back and with such a nice beer.

A short jaunt over to Belgium for De Ranke XX Bitter (Belgian IPA). This was an abbey style "farm ale", which I found was a little too hoppy for me to start with, but once I tried it with the mussels in fresh herbs and tomatoes, WOW! This pairing completely changed the flavor of the beer in the most amazing way. My notes say: "made it very yummy" :) And none of us, excepting the one that doesn't eat shell fish, could not get enough of these mussels and broth! Of course, they were served with amazing Belgian style pommes frites. This was the course I could've eaten over & over again.

Onto the Netherlands - land of tall and very polite people, and amazing beer. We were treated with Christoffel Nobel (Imperial Pilsner), apparently the first Trappist brewery to open in the Netherlands. We felt for certain that this could easily be a terrible hangover beer, due to the fact that it was remarkably delicious and 8.7% ABV. My friend, Julie, and I both tasted Bing cherries and mandarins in this beer, and it was again another amazing pairing! Served with house-cured gravlax with a hovmastarsas sauce, capers, shaved red onion and toasted Metropolis Bigio.

Then, surprisingly, we came back to America for a Michigan brewed beer. I guess Michigan is like another country to those of us that live out in California, but more importantly, it was a good cask ale - specially made just for the Monk's Kettle! This was an odd beer, with an odd name: Jolly Pumpkin Barn Noire, which tasted sweet with hints of cinnamon and orange peel. Chef Kevin Kroger felt that such a strange beer deserved a strange course, and for the first time in my life I had lamb tartare, served with house made crackers. I found the lamb so tender and tasty. I wasn't sure I'd be a fan of raw ground lamb, but Chef Kroger worked magic and made an amazing pairing (and was super nice and provided Mark with some roasted goat cheese, as he just couldn't tolerate the thought of eating raw meat).

Now for our cooked lamb course, a delicious lamb stew, we went to Norway for Nøgne-Ø Porter (American Style Porter). Like many porters, this one tasted heavily of chocolate and espresso and ... pure yumminess. Another friend at the table stated that he loved this beer more than anything, and yes, "I want to marry it". His review of the stew: "Like being wrapped in a snuggie". The lamb stew, with onions, carrots, celery, turnips, Bay leaves and fennel, paired so well with this beer, it really showed how well Chef Kroger can match up entrees when given a wider selection of beers.

At this point, I can't lie, we were getting a little tipsy. While it's not like each of these beers is coming in a pint glass, they do keep coming. Fortunately, the staff at the Monk's Kettle is well prepared for happy beer drinkers and kept all of our water glasses full and kept quickly bringing out the food :-)

Our next stop on our international tour was in Denmark for Mikkeller Christmas Chokladbollar, served with a "traditional dessert" of chocolate balls rolled with oats and covered in coconut. I definitely got apricots on the nose of this one, but on the palate a different beast arose: nutmeg, cinnamon, chocolate - well, to me & Julie, this beer tasted exactly like Toll House chocolate chip cookies. To Phil, it was "Christmas in the mouth". Okay, at 11% ABV, we were more than tipsy, but did all love this beer and the chocolate balls that came along with it!

The dinner ended with a Belgium Redux: Struise Pannepøt (Quadrupel) at 10%. We all loved this beer. Julie thought it tasted like "a great espresso that you have with a dash of nutmeg". Sirena said simply, "This is good".

Chef Kevin Kroger has grown by leaps and bounds. This dinner was amazing, the pairings were intriguing, and the service was phenomenal. I really enjoy hearing directly from the importers and hearing various stories about the beers and the brewers.

Soon I'll be writing up the March dinner :-)
Posted by Valerie Fenwick at 9:22 PM 1 comment: