Wow! In one of the most amazing experiences of my life, I completed over 100 miles with my fabulous teammates in the American Lung Association's Breathe Easy Ride. I raised $4300 and the team raised $7656 (before any corporate matching) to help make lung disease walk the plank!

Since January, I had ridden over 1600 miles on my road bike, but still nothing could've prepared me for this. It was intense, exhilarating, heart breaking, exhausting, difficult and full of joy, laughter and unexpected camaraderie. My team was my pack. I could not have done it without their physical and emotional support, and the amazing support of all of you who donated to my ride and sent me inspiring letters. 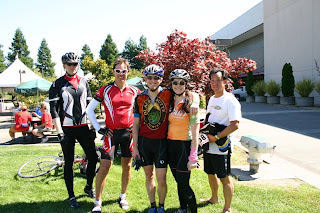 A misfit team of current Oracle and former Sun employees, all with different abilities and skills, started leaving the parking lot at the Sonoma Mountain Village about 5:40AM on June 26th onto the foggy and desolate roads of Rhonert Park. I left first, as I am the slowest rider on the team, and found myself riding amazingly fast accompanied only by horses and cows, trying to get as many miles under my belt before my team caught up with me. The air was thick with fog and quite cool, and I quickly warmed up as I was maintaining speeds over 15 mph.

Mark, Richard & John caught up with me after nearly a half an hour, apparently wondering where I'd gotten off to as they were not expecting that sort of speed from me... and warned me not to spend all my energy too soon. :-) Mike & Bryn were the last group to leave the parking lot, and inadvertently followed some 66 mile riders and started off on the wrong path - bypassing the rest of the team completely...until later.

As per my plan, I spent only the minimal amount of time at the first two rest stops - just stuffing my face with potatoes (YUM! roasted with rosemary!) and fruit, reloading my Cytomax and topping up my water. At the third rest stop, we had a surprise: Mike! Poor Mike was getting over a bad cold and just couldn't keep Bryn's pace, but this was good for us as we now had 5 people in our pack!

The weather stayed on our side, remaining cool, foggy and overcast until about 10 AM when the Sun just started to peak through. The five of us maintained time trial positions (single file line, each rider right on the back wheel of the one in front), taking turns at the front. While I am used to drafting with one or two people, the formation with this group of 5 riders had us moving like the wind! At our 4th rest stop (55 miles in), we were still maintaining an average speed over 15mph, even with several moderate climbs past us. We were cool, fresh and all felt great!

Then came Coleman Road. As we started the climb, John & Mike got out ahead of us, missed a turn and went 5 miles out of the way before realizing their mistake. Richard, Mark and I slowly climbed up this steep and soul crushing road, when lo-and-behold, down came Bryn! Curious as to why he was going the wrong way, we stopped only to discover that when he finished his descent to the coast and reached HWY1, it was so impassible with fog, his only option was to turn around and climb back up Coleman Road.

Bryn regaled us with tales of rough road and cattle grates before continuing onto his own personal journey, but not even his warnings could prepare us for what lay ahead. I could've used my mountain bike, the roads were so rough and twisty (and why on earth were there so many cattle grates?!?! WHY!?!)... heck, I could've used a car. It was brutal, desolate, frightening and beautiful.

When we reached HWY1 about 70 miles in, it was foggy, but we had at least a quarter mile of visibility, so Mark, Richard and I persevered ahead - little did we know poor John was back on track and doing that terrible climb alone, even though he'd already done an extra 500 feet/10 miles on his detour. It was noon, and I foolishly thought that I could do 30 miles in just under 2 more hours....

The climb out of the coast and back to the valley was unbearable. My legs were tired. I was hungry & thirsty. Fortunately, Mark had been carrying around extra food & water all day - as there were more than 30 miles of intense climbing and scary descents between rest stops! Mark was happy to lose the extra weight, and Richard & I were happy to have food and water :-)

For those of you who are curious, we were following (in reverse) the Tour de California route - yes, serious climbs for professional riders. The pavement was graffiti'd with ALLEZ, ALLEZ, ALLEZ and various rider's names.

After finishing our descent into the valley, we found Mike, who had backtracked on the route in order to skip the Coleman climb (since he'd done that bonus 10 miles with John), yet still get 100 miles in.

When we arrived at the 5th rest stop at mile 82 a bedraggled mess, happily greeted by volunteers from the Salvation Army with warm roasted potatoes, nuts, and ice cold water. The sun was out by then and we were all getting tired. As the four of us pulled out of the rest stop, we spotted John pulling in. Knowing he'd catch up, we continued on. At this point, every little hill just killed me. I'd have to immediately drop into granny gear and just use every ounce of energy I had just to keep spinning my legs. My quadriceps were burning. My IT-bands were on fire. I could only think of all the support I had and I knew I had to finish. Mark, knowing how important this was to me, literally pushed me up the remaining hills, even though he was beyond exhausted himself.

Terrified of being removed by SAG for taking so long, as the ALA said would happen, I just kept spinning, making it to the 93 mile rest stop just as they were closing. They gave us some fig bars and cold water and we were on our way again - this time with John!

Somewhere on those last 10 miles, Mark, Richard and I got separated from the group when we had to wait an insanely long time to turn left at a T-intersection. As the three of us were on final approach, Richard ran over a small drill bit that managed to pierce the wheel and slide *into* the spoke. Mark & Richard weren't sure if they were going to get that drill bit out, so I pushed on ahead.... and missed a turn, getting lost with 103 miles completed. 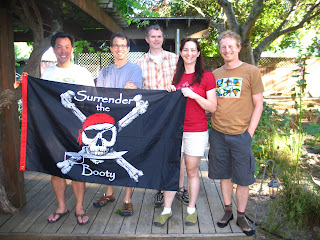 The most difficult thing I've ever done. I'm still recovering. Thank you everyone! Thank you!
Posted by Valerie Fenwick at 3:41 PM 3 comments: