I've got a huge backlog of beer related blog posts, so many that it's a bit overwhelming. So, instead of starting many months back, I'm going to restart with some recent brew dinners and hopefully get the others picked up in a retrospective of sorts.

A new restaurant in Mountain View recently opened up called Scratch. They feature upscale American "comfort food" and have recently begun doing beer dinners. This is very appealing to me, because I can walk there, which beats the myriad of trains and late nights it takes to get to the Monk's Kettle (but, wow, are the Monk's dinners good).

The featured brewery on July 7, 2011, was Lagunitas Brewing Company, based in Petaluma, California. I've been to a Lagunitas beer dinner before up at the Monk's, so I was very excited they were coming down to Mountain View. You've probably all seen their IPA in the grocery store, but don't let that fool you - Lagunitas does a lot more than just IPAs.

The first course, prepared by Executive Chef Sean Eastwood, was an ahi tuna "gazpacho". With a name like that, I was expecting a sort of soup, but what we got was a lovely, thick piece of raw tuna topped with a sweet gelee, served with an heirloom tomato confit, almond and avocado puree. This was paired with Lagunitas classic IPA, coming in at the evening low of 6.5% ABV. The IPA is their standard hop forward American style IPA, which was softened nicely with the food. An excellent pairing. 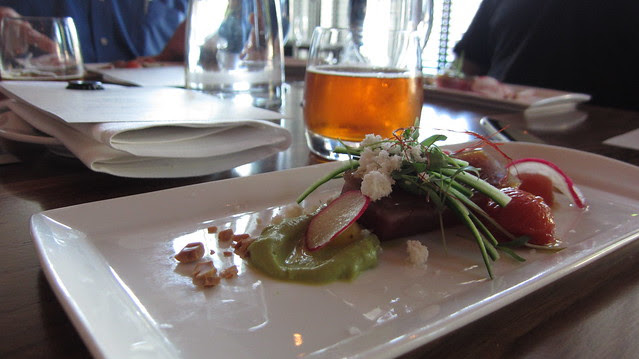 While waiting for the next course, we got to try the Wilco Tango Foxtrot (available in the 22oz section of many local groceries - yay!), a wonderful brown ale with 7.8% ABV. Jack Alger, in charge of Ales and Marketing at Lagunitas, told us a bit about this beers origins: While most browns are low in alcohol and typically a session beer, that's just not what Lagunitas makes - yes, this beer was mild in flavor, with the slight nuttiness you'd expect from a brown, but an extra sweetness made this even easier to drink and reminiscent of a bourbon barrel ale. Approach with caution, as a 7.8% ABV beer will bite you on the butt if you're not careful! 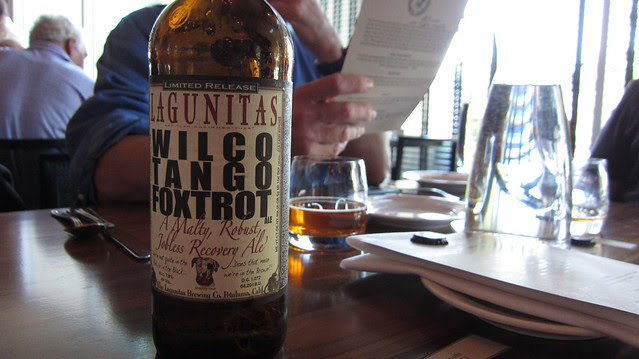 The next course was sweetbreads. Not something often eaten anymore stateside, but something my husband, a Brit, had had more than enough of growing up. Scratch and the chef were awesome and prepared my darling husband some sweet pea ravioli as an alternate course. 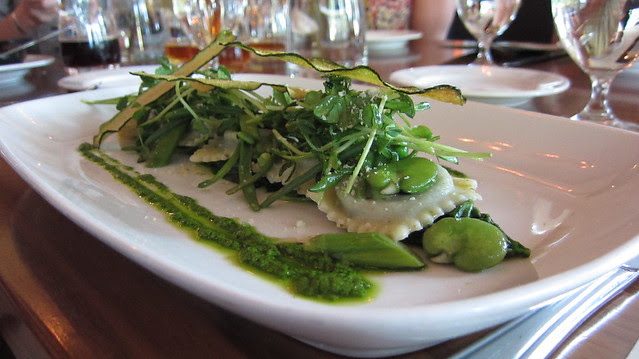 He absolutely loved the course and in particular the thinly sliced fried zucchini.

The rest of us at the table got the sweetbreads. I'll let you read the wikipedia entry to see what exactly sweetbreads may be (hint: all kinds of things qualified as offal), so as diners, we were left to our imagination to guess what exactly we were eating. The black lentils were delicious, but the citrus (grapefruit?) was a bit too tart for the beer and the rest of the dish. The sweetbread itself (which was later identified as the thymus gland) was very fatty, and tasted a bit like chicken livers with the texture of frog legs. I think it could've been much better prepared if it were in a bread sausage like form, where the bread could've helped to soak up some of the fat. The fried giant capers, though, were a nice touch. 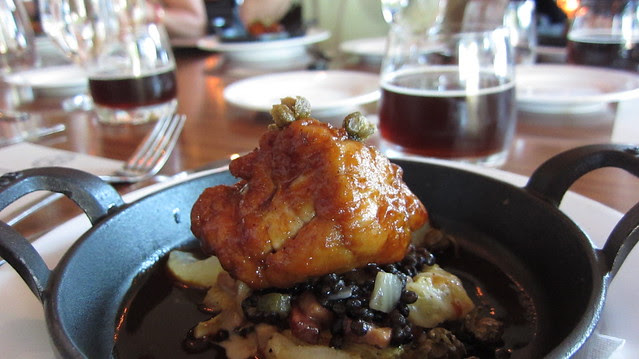 Next came out the Lagunitas Hop Stoopid. With a name like that, I was worried - I like a hop flavor in my beers, but not "attack hops" - you know the kind, so bitter they make your tongue curl? Well, it was a bit like that... but, my husband and the other Brit at the table love their beers like that, and so the ABV 8.0% brew did not go to waste.

This was paired with the "Bone Marrow, Two Ways" course. As should be obvious from the picture, the first way was right in the bone. The second way was fried - a bit like a tater tot. This came with a wonderful salad, again with grapefruit, that was very delicious. I spread my bone marrow right onto the crunchy crostini, but even then it was still a bit too rich. I'm not sure how the fried quail egg fit into the picture, other than making for quite a beautifully plated dish. 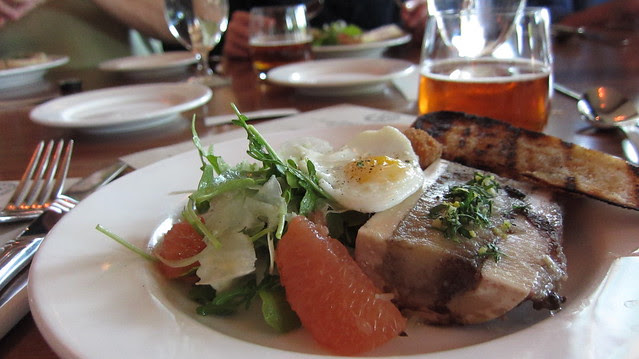 Finally, the Lagunitas folks brought out one of my favorite styles: a red! The Lucky 13, coming in at a hefty 8.3% ABV, was a much more mellow beer than the Hop Stoopid, with toasted malts being the prevailing flavor. This paired wonderfully with the lamb ravioli served with sweet peas, pickled artichokes, mint syrup, pea and mint puree all on top of... cassoulet lamb shank! This was a meat lover's delight. The ravioli was fork tender, and the lamb simply melted in your mouth. The beer positively opened up with this course, the best course and the best pairing of the night... well, until dessert. 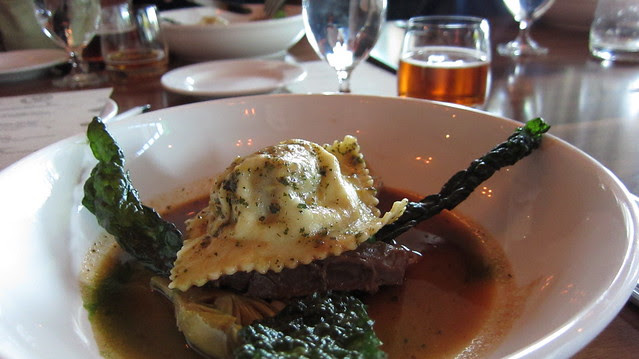 Lagunitas delighted us with the next beer, Little Sumpin' Sumpin' at 7.5% ABV. This was their version of a Belgian Wit beer, made with Belgian yeast, yet filtered (which seems, at least for me, to lower the hangover factor). While it was hop forward, the beer was still delicate and sweet, with a slight hint of peach to it, which means it paired absolutely perfectly with the Peach Buttercake. The cake, similar to an upside down pineapple cake - just with peaches, was moist and bold enough to stand up to the beer. The lavender caramel made it all just like a spa experience. I was in heaven. 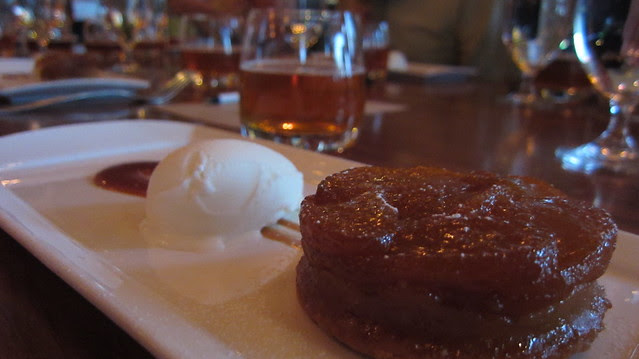 That was supposed to be our last course, but Jack had something else up his sleeve, a Cappuccino Stout (8.8% ABV). This beer, which smelled just like chocolate covered espresso beans, was actually made with a special blend from Hardcore Espresso in Sebastopol. 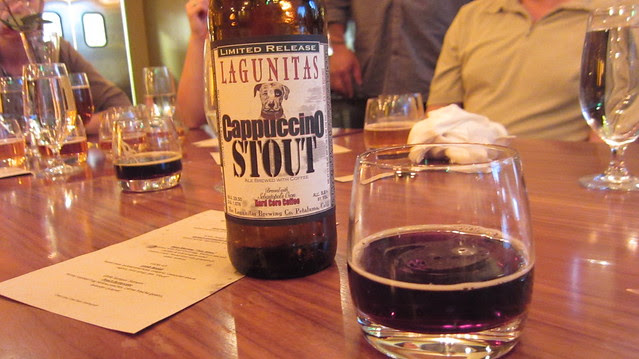 I was actually thinking at the time that I would've liked some more of that ice cream from the previous course so I could make my self a beer float. Fortunately, the chefs wanted to surprise us as well and they brought out a bonus dessert of chocolates! Splendid! 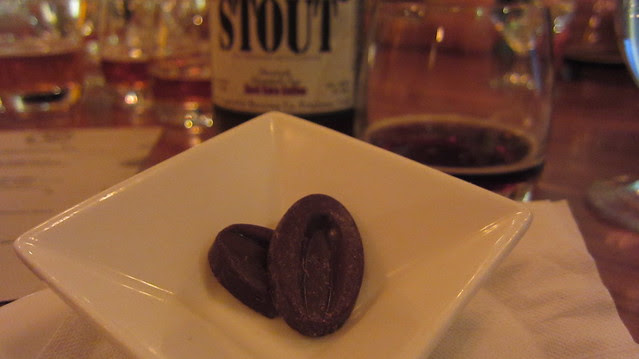 Overall, a magnificent dinner right here in Mountain View. The staff was friendly and accommodating. I loved having someone from the brewery present to tell us all about the beers, and the pace of the food was perfect. For future dinners, though, I would recommend the chef try to balance the super rich and a bit strange courses more with the rest of the menu. The only bad surprise came at the end when there was a 22% gratuity added on top of the total bill (that is, food plus tax). I didn't expect that for our group of four, and only mention it so that if you join a future dinner, you can be prepared.

Now the question, do you like the picture of the course before I talk about the course, or after (as is done in this post).

This post syndicated from Thoughts on security, beer, theater and biking!
Posted by Valerie Fenwick at 12:00 PM No comments:

Woe is Me -or- Going through TSA with a broken finger...

Sorry it's been so long since I've written - I had a broken finger!  It's mostly better now, but for awhile there, I kept my typing to mostly work specific activities. Typing when down an index finger is not the easiest thing to do, especially since I've been touch typing since I was 12 years old, not to mention the finger just plain hurt.

What does this have to do with the TSA you might ask?  Well, I did this on my way to the airport when I was coming back from a trip to Fort Wayne, IN.  Being rushed, talking to my sister on the phone, and my dad and a friend in the car, while getting out to get a coffee... something fell through the cracks. Well, or got stuck in it... slammed that finger right in the door! The folks at Starbuck's were kind enough to give me a bag of ice, but that was not something I really needed at that moment. While I didn't know it was broken, I did know it hurt like nobodies business.

Fast forward 20 minutes and we're going through TSA. The Fort Wayne airport, while very small, seems to have the most well provisioned TSA division in all of America.  If there's a new process or tool, they have it.  Plus, they don't really have any lines, so what's the rush?

I'm not a big fan of the new scanning machines. I think they were rushed into the airports, aren't well studied, and are a great example of industry lobbyist pushing "safety" standards, so I wanted to opt out.  One of my traveling companions has recently had a lot of radiation (treatment for cancer) and also opted out.

This airport isn't really set up for this - as the line just puts every single passenger through the scanner, so anybody that opts out has to go through an unusual procedure.  As my friend was also a female, she had the one female agent on pat-down duty totally occupied, so I had to send all my luggage through the x-ray and wait on the outside of the metal detector.

Even though my finger was in excruciating pain, I waited until my friend cleared.  My pat down was uneventful and no worse than I've gotten before when setting off the metal detector. I was neither embarrassed nor threatened, the TSA agent was respectful and friendly, and she screened her gloves for explosives after the pat down.

But then I set off an alarm.  Hrm. Even though my finger was in excruciating pain, I had to go to another room and get another pat down, this one slightly more invasive. After awhile, the agent and her supervisor took pity on me and brought me the ice my husband had gotten for me, which helped a lot.

But then I set off the alarm again.  This time nobody knew what to do next. They decided they needed to double search my bags (by rescreaning, hand check and check for explosive residue), but that's where there was another pickle. In all that time where I was not able to get to my luggage, my husband had repacked it for me. And since he was standing with our traveling companions and TSA didn't know, 100%, if something may have been handed over - my companions all got rescreaned. They (and all of our luggage) were negative for any residue or suspicious items.

I finally thought of what might have been causing the alarm: I'd gone to an antique store with my Dad that day, and he'd looked at antique guns. Was it possible I actually *did* have residue on me?

Two TSA agents and two supervisors later, we were all on the airplane!

Coming home, my husband thought of a more likely cause: I'm always fertilizing things in our garden and may have done so in those same jeans right before I left.  Word to the wise, don't wear clothes to the airport that you may have worn in your garden! Or go antiquing ;-)

As I was walking away, one of the TSA supervisors asked the other, "Did you write down her name?", and I heard, "Yes, it's right here."  Which, of course, means I'll be sure to be extra early for all of my future flights.

Now, why is this all so frustrating? I'm sure you've all heard of the guy last month that was flying around with expired boarding passes.  He wasn't arrested the first time he was caught, but the second time.  Are we really spending our efforts in the right place?

This post is syndicated from Thoughts on security, beer, theater and biking
Posted by Valerie Fenwick at 1:26 AM 1 comment: