My heart has been broken over and over again by the recent news stories about women in tech simply being attacked online. What's worse, is when someone like Alissa Quart writes an article about the types of online abuse women face along with in person abuse at conferences, she herself becomes a target.

Let me say, that I've been to many awesome conferences where nothing worse than a bit of mansplaining occurred.  But I've also been to my fair share where people called me a "scene whore", constantly asked who my boyfriend was (because why would a woman attend a technical conference by herself?), and flashed me (yes, a man showed me his genitalia on the conference room floor), to know that not all conferences are equal.

+Valerie Aurora started the Ada Initiative to help conference organizers make their events more female friendly, and encourage participation of women in Open Source.  Those of you that know Val know how active she's been in Linux and Solaris kernel development over the years: she's smart and compassionate.

Val and I met at an early DefCon - 3 or 4? At the time, still a small community with mostly nice guys (I only got 1 or 2 creeper emails following my first DefCon - which was also the last one where I used my real handle on my badge).  The conference is much larger now, and has definitely had some growing pains. It's definitely a place where you'll meet really awesome people and learn fascinating things - but there are less savory people there as well.

I have my DefCon stories. After seeing the fallout on other websites about this article and to the Ada Initiative blog entry that seemed to shine the light brightest on all of this, though, I don't feel comfortable sharing the details at this time. 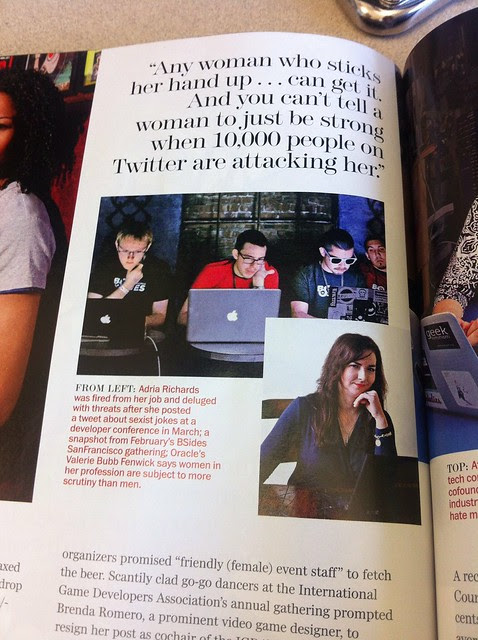 Val and I were both interviewed by Alissa and photographed by Nicolas Silberfaden, a strange thing for both of us.  Two nerds in a fashion magazine? And both named Val?

Please do check out the article.  You can find it online, but neither Val nor I had our pictures in the online version. To see our pics, you'll need to pick up the June 2013 issue of Marie Claire at any store that carries magazines.

Update: There's a great article from The Raw Story about online and in person sexual harassment covers the odd phenomen we're all witnessing now where the harassment is seen almost as a game, and when someone like Val tries to speak out against it, she's seen as a "Feminazi" and being overly political.
Posted by Valerie Fenwick at 7:49 PM